0 products
You are here: Home » About Company

Over 700 scientific publications, including 26 monographs; 205 patents and inventions (90 international ones among them) in the field of biotechnology, immunology, biochemistry, pharmacology, oncology, gerontology. 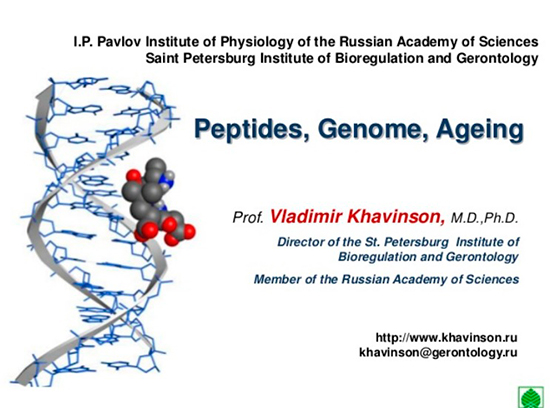 The main published results of research studies on peptidergic regulation of body functions. (2010–2015) 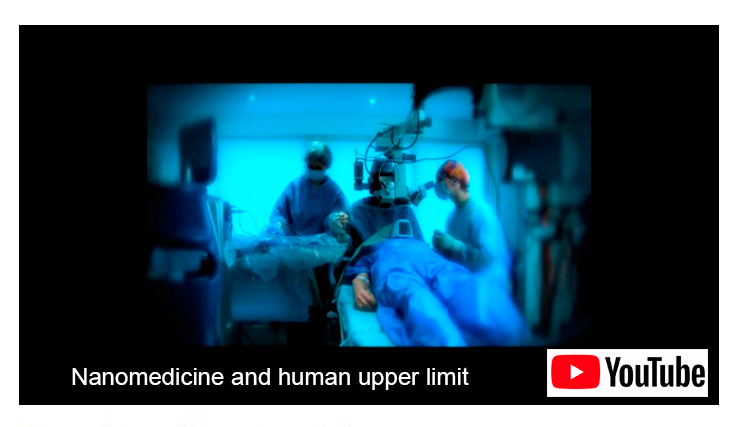 You can follow this link to view the video translated into English https://khavinson.info/video

Health and aging in Russia
Global health and global aging

St.Petersburg Institute of Bioregulation and Gerontology

In the following photos you can see professor V. Khavinson alongside with Nobel laureates, prominent scientists, public and political figures as well as sports and arts celebrities. 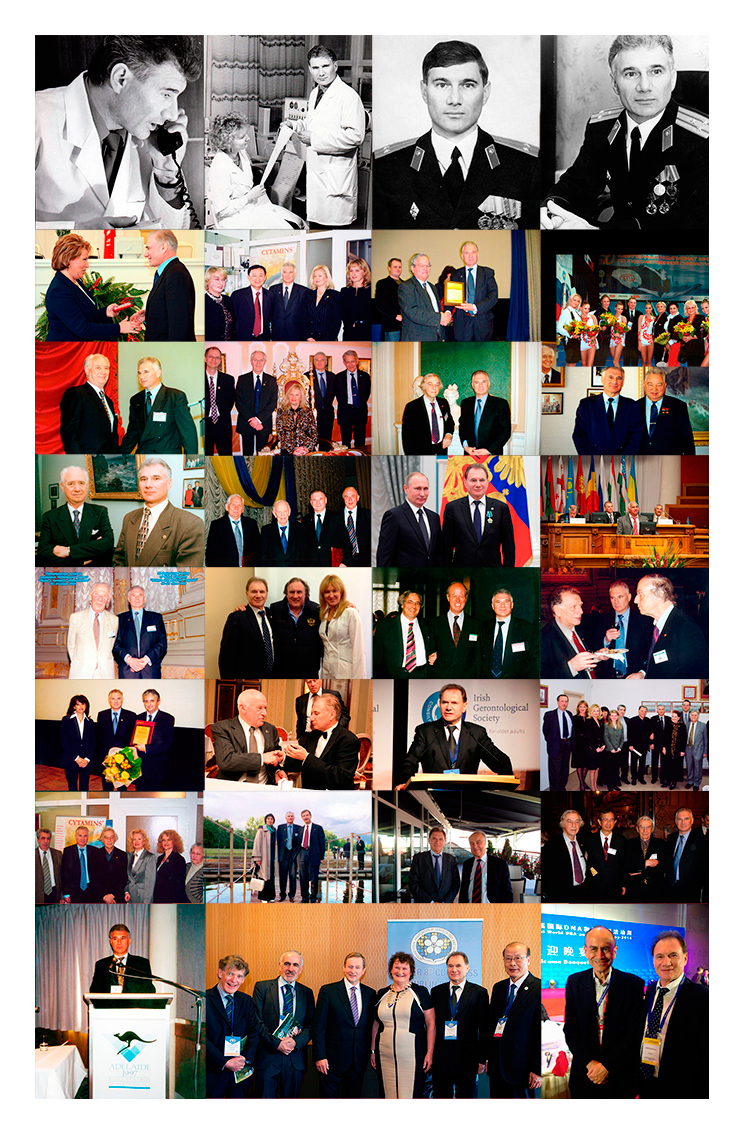 Today, Center of Revitalization and Health is a rapidly growing company that increases its presence in the domestic and foreign markets, extending its boundaries of business and scientific co operations. The result of NPCRIZ dynamic development in figures is the following: from 7 peptide bioregulators to more than 100 different kinds of unique products for health and active living, 2 representative offices in Moscow and St. Petersburg, more than 300 offices worldwide, including Russia, Europe, CIS countries, USA and Canada.

Uniqueness of the company is determined by the exclusive rights to promote the latest high-performance products of the St. Petersburg Institute of Bioregulation and Gerontology in the fields of medicine, genetics and molecular biology. NPCSRIZ is not only a strategic partner of the Institute, but also a co-author of many innovative products for the revitalization and maintenance of well being.

The fundamentals of the cooperation is the active long living, which proclaims- modern, safe and effective impact on the human organism, slows down ageing processes and achieves long and active living. Today, the main purpose of NPCRIZ is to popularize and promote the concept of peptide revitalization; thus not only to increase the average life expectancy rate by a few percent, but also to decrease from 3 to 5 times the risk of cancer, cardio-vascular diseases, and etc. After all, every single geroprotecor has more than 30 years of reasearch and thousands of observations.

From September 2011, together with the Institute of Bioregulation and Gerontology NPCRIZ has been involved in the State program for the prevention of age pathology and accelerated ageing in order to decrease premature mortality rates from biological causes and to increase working age periods of life in Russia. The State program was created by the Decree of the President of Russia and approved by the Russian Ministry of Health. This program is moving in the direction of gerontology "Active long life" All-Russian public organization "League of health of the nation." Also, the company leads public receptions of the Institute of Information and Consulting Center of the League of Nation's Health, which is located in Pavilion № 5 All-Russian Exhibition Center in Moscow.

Another promising area of cooperative work of the Centre of Revitalization and Health and the St. Petersburg Institute of Bioregulation and Gerontology is an Anti-Ageing Clinic, which is the foundaition research platform of the company, where a very exclusive method of 30-year study of peptides is being used, and a wide selection of anti-Ageing treatments are performed including mesotherapy with peptides and peptide body wraps. At the clinic, everyone has an opportunity to pass a comprehensive examination of the human organism, to determine its genetic identification and based on the results an individual program of revitalization is designed. Chief Scientific Adviser of the Center of Revitalization and Health – V.H. Khavinson, director of the St. Petersburg Institute of Bioregulation and Gerontology, scientist with a worldwide name has given the highest mark to NPCRIZ for: implementing long-term projects aimed on improving the quality of life for all people in society and to firmly establishing itself in the community of healthy life living. A high mark was also received on a Federal level.

Scientific advisor of the Center of Revitalization and Health – G.A. Ryzhak, vice-director of the St. Petersburg Institute of Bioregulation and Gerontology, Professor, Doctor of Medical Science has been actively involved in teaching and educational work of the company. Mrs. Galina Antalolievna performs all the main activities in the company: she participates in the events of the company with reports on the study mechanisms of aging and the development of methods for the prevention and correction of the ageing pathology, based on the using pathogenic peptide bioregulators.

With each day at the Center of Revitalizaion and Health there is a new goal set up. The main priorities are to open regional gerontological centers and public receptions under the League of Nation, to research the effectiveness of different classes of geroprotectors and to develop new classes of products which would be aimed at the various links in the pathogenesis of fast ageing.

With the help of highly qualified staff, who always unconventionally and creatively solve problems; with the help of modern productions sites which keep up with all the international standards of quality and safety- Center of Revitalizaition and Health at all times successfully achieves its goals and offers only the best to the partners-safe and very effective products which do not have competitors in the domestic and foreign markets.

By the 8th anniversary of the company, there was a great potential for introducing the new development and customer service standards. Large-scale renovations and rebranding were carried out in May 2018. The brand has evolved: NPCRIZ has become PEPTIDES. Global internal changes have been implemented to reach the whole new level. The need for rebranding was dictated by some serious advances in the anti-aging technologies. Now aging does not only concern people of mature age but also young people, the so-called millennials. The high pace of life in metropolis causes constant stress and diseases to “get younger”. Therefore, our clients are not only elderly, but also young people.

PEPTIDES is the leader in anti-aging technologies, peptide and non-peptide bioregulation. Today, our products are shipped to numerous countries around the globe. PEPTIDES offers a variety of more than 200 preparations that have no analogues both in Russia and abroad. Recently, numerous innovative products have become available and it had a global impact on the development of the company. These unique peptide-based products trigger rejuvenation processes at all levels as well as provide complete professional facial skin care.

We make results accesible to millions of people from the production of unique developments from the leading worldwide and Russian Scientists in the fields of-medicine, genetics and molecular biology; thereby improving the quality of their living standards. We give health, well being and confidence for the future. We raise the prestige of the Russian Federation in the international scientific community.

St. Petersburg Institute of Bioregulation and Gerontology was established in 1992 and has been engaged in research in bioregulation and gerontology. Its basic task is to introduce into the medical practice the results of 20-year experimental and clinical studies of a new class of medicinal substances – peptide bioregulators, which were created in the Research Laboratory of Bioregulators of the S.M. Kirov Military Medical Academy.

In 2001 the Institute was integrated into the North-Western Branch of the Russian Academy of Medical Sciences. Research activities of the Institute are related to:

Presently St. Petersburg Institute of Bioregulation and Gerontology of the North-Western Branch of the Russian Academy of Medical Sciences is the only research institution in the North-Western region of Russia, which is engaged in research on ageing, and at the same time is an active clinical diagnostic center in gerontology and geriatrics.

TD Peptide Bio offers peptide based dietary supplements, manufactured using the most advanced technologies and in accordance with strict international quality standards. These next-generation dietary supplements have no analogues in the world. Before being launched each new preparation is thoroughly tested. Our researchers have been gathering knowledge and building a vast database of clinical observations conducted by a group of V.Khavinson.

Only the most comprehensive and proven findings laid the foundation for the formation of industrial production of peptide based dietary supplements. More and more leading European pharmaceutical companies successfully collaborate with TD Peptide Bio. TD Peptide Bio produces and markets peptides proven to be of the highest quality and effectiveness.