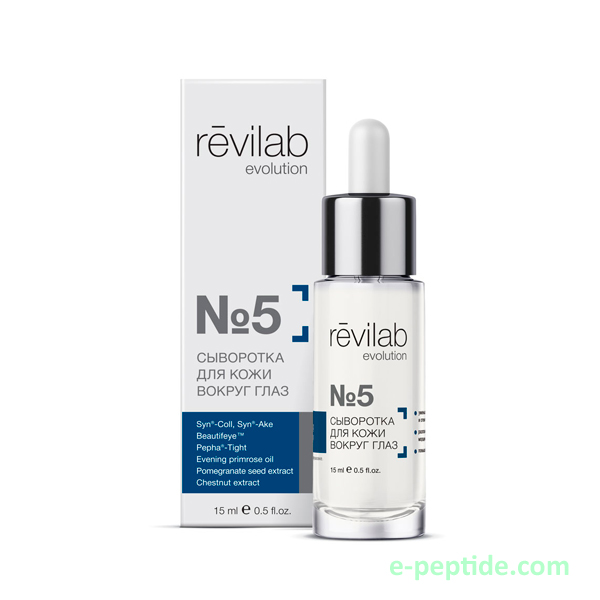 Beautifeye™ and horse chestnut seed extract directed  are acting at reducing swelling and dark circles under the eyes by improving the microcirculation in the superficial layers of the skin. Pepha®-Tight renders momentary lifting-effect, on long-term basis, protects skin cells from oxidative stress, coupled with Syn®-Coll stimulates collagen synthesis and protects it from destruction. Syn®-Ake has botox-effect, smoothing "crow's feet". Evening primrose oil and extract seed pomegranate have a expressed anti-aging and antioxidant effects, are improving skin tonus and stimulate regeneration, are preventing moisture loss.

To clean skin locally on the periorbital area, apply a few drops of serum and spread evenly over the massage lines clapping movements until completely absorbed no later than 2 hours before bedtime. After completely absorbed, apply cream of series reviline depending on the time of day. Depending on the age of use serum 1-2 times a day. For maximum effect, use a serum regularly for at least 28-30 days 3-4 times a year.

Biotechnological complex Beautifeye™, which combines the action of two plant extracts: Albitius zhulibrissinskoy, also known as the Persian silk tree and Sigezbekii east. Beautifeye™ combats harmful effect of glycation - the result of endogenous spontaneous reaction between the sugars, which are transported in the blood stream, and the fibers of the dermis (collagen and elastin). Due glycation structural tissues become harder and the fibers of the dermis are damaged. By strengthening the fragile capillary network Beautifeye™ reduces puffiness and dark circles in the periorbital area, improves the properties of the dermis, stimulating the detoxification system, reduces wrinkles, including in the "crow's feet", tightens the skin of the upper eyelid.

Beautifeye™ - this is unique in the history of the cosmetic industry, the active ingredient in respect of which officially proven lifting effect on the upper eye century. Thus, to date, it remains the only confirmed in clinical studies alternative blepharoplasty (eyelid surgery).

Syn®-Ake - a high-tech synthetic peptide having mimic activity similar to the activity of a polypeptide found in the venom of the Temple Viper, (Tropidolaemus wagleri). Clinical trials have shown that Syn®-Ake is able to reduce wrinkles by inhibiting muscle contractions, working as a muscle relaxant. Syn®-Ake - safe replacement of Botox. Also has a pronounced effect of smoothing the skin and smoothing her tone, it prevents the appearance of new wrinkles in the "crow's feet" and reduces the depth of existing ones.

Syn®-Coll - an innovative peptide complex, which is the point of application of the dermis. It has a dual action, enhances the synthesis of collagen and protects it from destruction. It is thanks to the results obtained with regular use of cosmetics with Syn®-Coll? there was such a thing as "wrinkles iron." The use of cosmetic products, which include Syn®-Coll? an alternative procedures using injections of hyaluronic acid.

Pepha®-Tight is a biotechnological complex of microalgae (Nannochloropsis oculata). It has not only an immediate lifting effect, but also stimulates the formation of collagen type 1, protects the skin from oxidative stress, has a prolonged effect, reinforcing the dermal matrix. Pepha®-Tight - a substance derived from microalgae, which have the smallest cell size (from 3 to 30 micrometers), they serve as food for the valuable fish species. A unique feature is the presence of algae's own antioxidant system, which was formed due to the high concentration of oxygen. That is why Pepha®-Tight has an unmatched ability to protect the skin from oxidative stress.

Letsigel - a gelling agent with the properties of the emulsifier. Main plus gelatin emulsifier is that it solves the problem of delivery of active ingredients into the deeper layers. Phospholipids are the lecithin components of cell membranes. Thus, not only it is letsigel base component, but also a functional component of a transdermal patch.