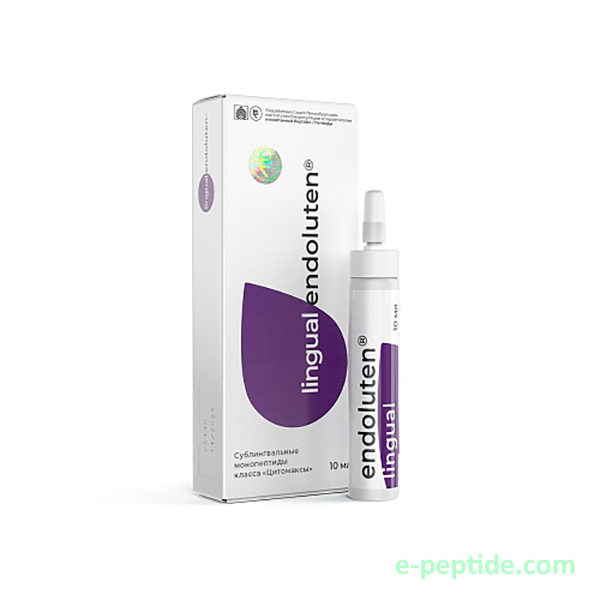 ENDOLUTEN® LINGUAL is a natural peptide complex extracted from the pineal gland of young animals. Such peptides have positive effects on the gland cells, they regulate the synthesis of melatonin and improve the function of the neuro-endocrine system. They adjust all cyclic processes in a body and help to restore the immune system.

Discharged peptides, included in ENDOLUTEN LINGUAL, possess selective action to neuroendocrine system cells, normalize metabolism in epiphysis cells and melatonin secretion, regulate hormonal metabolism, have regulatory effect to epiphysis and to all organism in general. ENDOLUTEN LINGUAL is one of the most effective products for increase of life expectancy and delay of premature aging processes, since it is endogenous melatonin inductor in human organism.

Under action of ENDOLUTEN LINGUAL synthesis of melatonin becomes more active up to physiologically optimum for healthy organism. Food supplement restores synthesis of endogenous melatonin. The pineal gland peptides that make up ENDOLUTEN LINGUAL are identical to the peptides that are developed in a healthy human body, and for this reason, overdose or side effects are not possible when taken. It was confirmed by long-term clinical researches. ENDOLUTEN LINGUAL restores production of melatonin only to physiological norm, has bioregulating effect and balances vital processes in human body.

Endoluten is also very effective for those who fight cancer and undergo radiation treatment or chemotherapy as it improves the function of the blood-forming tissue, reduces anemia, increases white blood cell production and eventually makes the recovery period shorter.

This product is also recommended for women over 45 as it prevents them from the climacteric (menopausal) syndrome, a pathological negative reaction to decline in ovarian function.

Endoluten can be used in case of very intense physical activities and psycho-emotional stress, especially by solders in extreme conditions or by people in unfavorable work conditions.

Endoluten is well tolerated, with no identified side effects, complications or drug dependence.