0 products
You are here: Home » Diseases of the cardiovascular system » Revilab ML 04 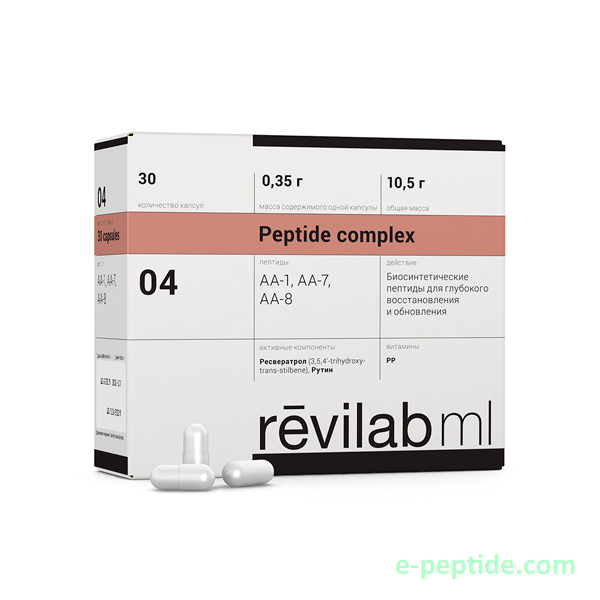 Effective action of Revilab Peptide ML is due to the high-tech formula: each of the 9 preparations contains a number of synthesized peptides that have a faster effect on various body systems, triggering the function of restoring internal organs, unique plant components that have powerful antioxidant and anti-age effects and vitamin complexes, They play an important role in maintaining the optimal functioning of immunity.

It regulates the function of the cardiovascular system and restores myocardial function; restores microcirculatory function in various tissues and organs.

Resveratrol (Resveratrol (3,5,4-trigidrostilben)) is a phytoalexin, one of the major components of the extract of red wine. White grapes and white wines contain little resveratrol. Like all polyphenols, resveratrol is a powerful antioxidant activity which is superior to vitamin E. Resveratrol exhibits estrogenic activity by binding to the same receptors as estradiol, one of the main human estrogen. In contrast to estradiol and dietilstilbestrona that accelerate the development of a number of hormone-dependent tumors and the excess of which is associated with an increased risk of developing breast cancer, resveratrol exhibits multifaceted antitumor effect. Experiments show that it inhibits ribonucleotide reductase and inhibit DNA synthesis mammals by blocking directly tumor cell multiplication. Another mechanism of antitumor action of resveratrol is its competition with estradiol for binding sites on the receptor, which reduces the stimulating effect of estradiol on cell hormone dependent tumors.Like all the phytoestrogens, resveratrol may reduce the risk of osteoporosis, which is often caused by a drop in estrogen levels in women during menopause. The same beneficial effect of resveratrol on the skin by stimulating the synthesis of collagen and preventing it from cross-linking. This effect is explained by the combined antioxidant and estrogenic effects resveratrol. Experimental study received and cardioprotective properties of red wine. It was found that the grape juice and red wine making low density lipoproteins extremely resistant to oxidation under conditions in vitro. Since the oxidation of low density lipoproteins in the blood is a major cause of atherosclerosis, grape polyphenols to prevent such oxidation, should substantially reduce the risk of cardiovascular diseases. Resveratrol - a regulator of fat metabolism in the body. Atherosclerosis of blood vessels associated with the intake of fat food, their absorption in the gastrointestinal tract, the concentration of lipid (cholesterol and triglyceride) in blood plasma deposition and penetration of products of oxidation of lipoprotein (fat + protein) in the blood vessel wall, followed by adhesion of platelets and plaque formation. This leads to a narrowing of the lumen of blood vessels of the heart muscle, brain and other organs.

It is important in the processes of carbohydrate, protein and fat metabolism. It is necessary for the normal secretion of gastric juice, as well as for the activity of the intestines, stimulates the activity of the nervous system and has a positive effect on the function of the endocrine glands. It has the ability to expand the capillaries of blood vessels, thereby facilitating blood circulation in organs and tissues and a person is protected from cardiovascular diseases, thrombosis, hypertension and diabetes. Vitamin PP is also needed to maintain healthy skin.

Rutin, quercetin-3-rutinoside, is an organic compound from the group of flavonoids, a molecule which is formed by flavone quercetin and the disaccharide rutinose. It contained in the leaves of rue and the tea bush, in buckwheat and other plants. It has vitamin activity. It normalizes permeability of capillaries, has anti-inflammatory effects and high P-vitamin activity.

Omega-3 is polyunsaturated fatty acids (alpha-linolenic, eicosatrienoic, eicosapentae- noic acid and other). It reduces the content in the body of cholesterol, triglycerides and low-density lipoprotein, inhibits the progression of atherosclerosis, cardiovascular and rheumatic diseases, thrombosis and normalize metabolic processes.

CERLUTENVENTFORT 20
Back to: Preparations for the Cardiovascular System.