0 products
You are here: Home » Diseases of the immune system » ACTOFLOR-S metabiotic 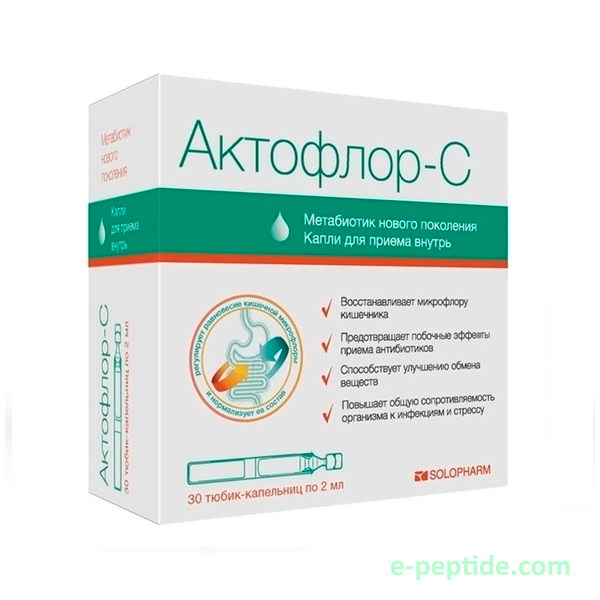 Preparation of a new generation to restore intestinal microflora.
Actoflor-S is a complex of amino acids and organic acids being analogues to probiotic bacteria metabolites.

ACTOFLOR®-S  is a new generation metabiotic contains a complex of amino acids and organic acids - analogs of metabolites of probiotic bacteria. The synergistic action of the components that make up the complex increases physiological activity and stimulates the growth of its own beneficial human microflora, increases its antagonistic activity against pathogenic microorganisms. The human intestinal microflora performs many functions, the most important of which is metabolic. Bacteria produce metabolites that act as signaling molecules, having a direct effect on metabolism, bowel, liver, brain function, as well as processes in adipose and muscle tissue.

ACTOFLOR®-S is recommended as a metabiotic for the restoration of intestinal microflora and normalization of its metabolic activity, as well as an additional source of amino acids, including essential ones and organic acids with a proven regulatory effect.
The complex of bacterial metabolites and amino acids restores the balance of the intestinal microflora, that can be disturbed as a result of diseases of the gastrointestinal tract, stress, poor environmental conditions, unbalanced nutrition and other reasons, helps to eliminate the symptoms of intestinal disorders
(diarrhea, constipation, bloating, pain), prevents the side effects of taking antibiotics, improves metabolism and also has a positive effect on immunity, increasing the body's overall resistance to infections and stress.

Succinic acid, L-glutamic acid and the essential amino acids L-lysine and L-methionine are the most active growth stimulators of the probiotic strain E. coli M-17, recommended by the Ministry of Health of the Russian Federation for use in the composition of immunobiological preparations - coli probiotics. L-methionine is currently the most effective natural antioxidant.
The components of ACTOFLOR®-S, especially succinic acid, have a positive effect on the proliferative activity of cells of the immune tissue, stimulating human immunity.

Sodium acetate is a stimulant for the growth of bifidobacteria and other representatives of normal microflora, together with lactic and formic acids increases the antagonistic activity of intestinal microflora, prevents the overgrowth of opportunistic bacteria and inhibits the growth of pathogenic strains of E. coli, as well as Salmonella enterica, which causes salmonellosis. In intestinal epithelial cells, adipocytes, immune and other cells, acetate interacts with specific protein receptors (GPR40, GPR41, GPR43), that is accompanied by the induction of the expression of genes responsible for the production of a number of hormones responsible for the synthesis of energy sources, regulation of appetite and satiety, and motility bowel and other functions. Sodium acetate enhances blood circulation in the intestinal mucosa, it is an energy substrate for muscle tissue, heart tissue, kidney, and brain. Sodium acetate and lactic acid regulate the pH level, motor and secretory activity of the intestine, have an antimicrobial effect. Along with formic and succinic acids, acetate is the main intermediate of microbial metabolism, participating in the synthesis of other metabolites important for the human body - butyric and propionic acids.

L-glutamic acid is involved in protein and carbohydrate metabolism, prevents a decrease in the redox potential, it increases the body's resistance to hypoxia, normalizes metabolism, changing the functional state of the nervous and endocrine systems, is a powerful neurotransmitter. As a result of its decarboxylation by intestinal bacteria, gamma-aminobutyric acid (GABA) is formed, that is another important mediator of the central nervous system, under the influence of which energy processes in the brain are activated, its blood supply improves, the respiratory activity of tissues increases and glucose utilization improves.

The combined action of eight amino acids (L-alanine, L-aspartic acid, glycine, L-glutamic acid, L-valine, L-leucine, L-lysine and L-methionine), four of which are essential amino acids, significantly increases the activity and effectiveness regulatory metabolites ACTOFLOR®-S.
All the components of ACTOFLOR®-S have a pronounced synergistic effect and the absence of at least one of them significantly reduces the effectiveness of its action.
ACTOFLOR®-S is hypoallergenic, it hasn't immunotoxic properties, doesn't cause side effects with prolonged use, is compatible with any type of treatment and can be taken both during and after antibiotic therapy.

As a biologically active food supplement - a source of succinic acid.

ACTOFLOR®-S does not contain gluten, lactose and casein. It is a biologically active food supplement, not a drug.

The daily dose (2 dropper tubes) contains:
not less than 56 mg of succinic acid, that corresponds to 28% of the recommended level of daily consumption in accordance with the requirements of TR CU 022/2011.

Storage conditions: at the temperature not exceeding 30 °C, out of reach of children. Store in the original package.

BONOMARLOTORVIS Immuno (Tilorone 125mg)
Back to: Preparations for the immune system