0 products
You are here: Home » Diseases of the nervous system » Revilab ML 01 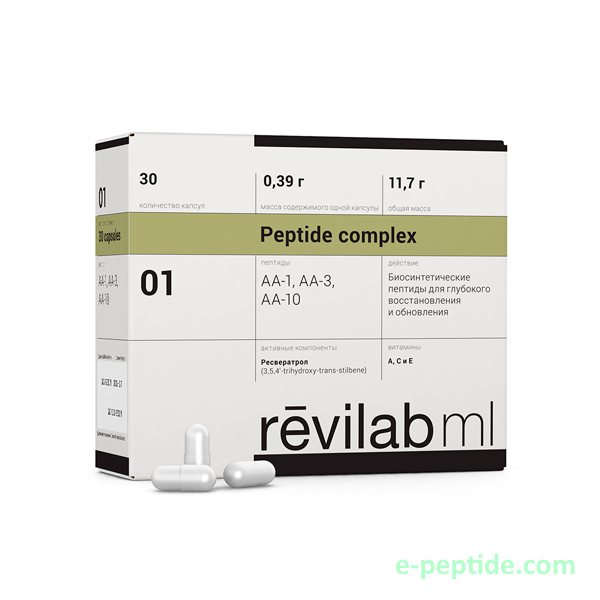 Resveratrol (Resveratrol (3,5,4-trigidrostilben)) is a phytoalexin, one of the major components of the extract of red wine. White grapes and white wines contain little resveratrol. Like all polyphenols, resveratrol - a powerful antioxidant activity which is superior to vitamin E. Resveratrol exhibits estrogenic activity by binding to the same receptors as estradiol, one of the main human estrogen. In contrast to estradiol and dietilstilbestrona that accelerate the development of a number of hormone-dependent tumors and the excess of which is associated with an increased risk of developing breast cancer, resveratrol exhibits multifaceted antitumor effect. Experiments show that it inhibits ribonucleotide reductase and inhibit DNA synthesis mammals by blocking directly tumor cell multiplication. Another mechanism of antitumor action of resveratrol is its competition with estradiol for binding sites on the receptor, which reduces the stimulating effect of estradiol on cell hormone dependent tumors.Like all the phytoestrogens, resveratrol may reduce the risk of osteoporosis, which is often caused by a drop in estrogen levels in women during menopause. The same beneficial effect of resveratrol on the skin by stimulating the synthesis of collagen and preventing it from cross-linking. This effect is explained by the combined antioxidant and estrogenic effects resveratrol. Experimental study received and cardioprotective properties of red wine. It was found that the grape juice and red wine making low density lipoproteins extremely resistant to oxidation under conditions in vitro. Since the oxidation of low density lipoproteins in the blood is a major cause of atherosclerosis, grape polyphenols to prevent such oxidation, should substantially reduce the risk of cardiovascular diseases. Resveratrol - a regulator of fat metabolism in the body. Atherosclerosis of blood vessels associated with the intake of fat food, their absorption in the gastrointestinal tract, the concentration of lipid (cholesterol and triglyceride) in blood plasma deposition and penetration of products of oxidation of lipoprotein (fat + protein) in the blood vessel wall, followed by adhesion of platelets and plaque formation. This leads to a narrowing of the lumen of blood vessels of the heart muscle, brain and other organs.

Vitamin A is useful as an active participant in the synthesis of proteins essential for muscle growth, maintain the structural integrity and function of the digestive tract, in addition, it contributes to the preservation of glycogen in the body - the main energy storage in the body.

It is one of the most powerful antioxidants, and it was first isolated from the juice of a lemon. It is fully soluble in water, and it gives him a number of advantages - for example, thanks to this property of vitamin C can penetrate easily and quickly to wherever needed, to help the immune system to eliminate malfunctions in the body, and run the processes needed for human health and life.

Vitamin E is necessary for all tissues of the body. It is a powerful antioxidant that effectively fights free radicals, affects the excretion of toxins and chemicals, thereby reducing the risk of carcinogens. It protects red blood cells - blood cells, which tend to enrich the tissues and organs not only oxygen but also nutrients; improves oxygen transport to the tissues, blood circulation, supply processes and oxidation of cells. Due to effects on blood clotting prevents the formation of blood clots in the vessels. It used for prevention of atherosclerosis.

It acts as a chemical intermediate in the processes of transformation of the amino acid tryptophan to serotonin, melatonin, and niacin. Tryptophan is involved in the conservation of nitrogen balance in the human body, and it is extremely important for overall health and for the recruitment of muscle mass in particular. Further, serotonin is synthesized from tryptophan deficiency which leads to depression and insomnia.

5-HTP provides melatonin synthesis, positively effect on the regulation of the sleep cycle. Melatonin is a natural regulator of circadian rhythms and melatonin deficiency, and a lack of serotonin often leads to insomnia.

Omega-3  is a polyunsaturated fatty acids (alpha-linolenic, eicosatrienoic, eicosapentae- noic acid and other). It reduces the content of cholesterol in the body, triglycerides and low-density lipoprotein, inhibits the progression of atherosclerosis, cardiovascular and rheumatic diseases, thrombosis and normalizes metabolic processes.

Revilab ML 03Revilab SL 02
Back to: Preparations for the treatment of nervous system diseases