0 products
You are here: Home » Healing and Prophylactic Preparations » OLECAP 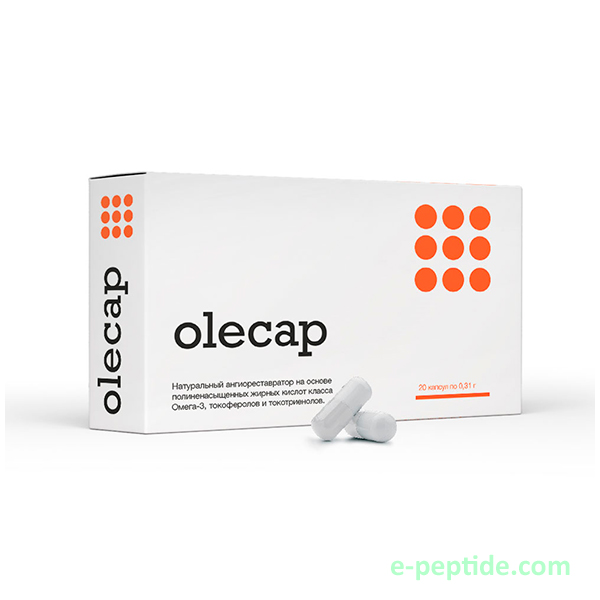 Olecap is a beneficial source from polyunsaturated fatty acids and antioxidants.

It effectively slows down the growth of atherosclerotic plaques, reduces cholesterol levels in blood. It has strong antioxidant properties. Olekap has natural polyunsaturated fatty acids omega-3, tocopherols and tocotrienols. It is used to prevent premature aging, hypertension and coronary heart disease, heart attack, stroke, diabetes, and cancer pathology, and during chemo treatment

Adults and children over 14 years: 1 capsule 2-3 times a day with meals. Course duration 4-6 weeks. If necessary, you can repeat. There may be repeated practices during the year.

Flaxseed oil has a high content of two groups of unsaturated fatty acids - Omega-3 and Omega-6. This product has a significant normalizing effect on lipid metabolism, it increases the elasticity of the vascular walls and helps to prevent heart attacks and strokes, multiple sclerosis. Harmonizing the metabolism and helps in attaining harmony. Flax seed oil is known a positive impact on all parts of the gastrointestinal tract, respiratory system, nervous system.

Oil cold-Irish salmon in combination with vitamins A and E

Components of the oil - the essential omega-3 fatty acids.

In humans, omega-3 fatty acids have a number of important functions, namely bioregulatory (Omega-3 are the "building blocks" for the hormone-like substances - eicosanoids that regulate many biochemical processes in cells and tissues), structural (Omega-3 are included in the composition of the membranes of body cells, such as brain cells, blood vessels, heart, retina and sperm), energy (fats are the main supplier of energy in our body) and reserving (Omega-3 fatty acids can "stock up" in the adipose tissue, although they postponed to a much lesser extent than saturated fats and, moreover, contribute to "mobilize" deferred fats, i.e. removal of old fat stores, and thus they should be a major part of fats coming from the food). Omega-3 polyunsaturated fats are highly beneficial substances with a wide spectrum of action.

By eicosanoids Omega-3 fats contribute to the expansion of blood vessels, thereby increasing blood flow to the organs and tissues and thus preventing hypertension. By increasing the content of omega-3 in the membranes of the cells of the heart muscle, they contribute to a more efficient heart function, reduce the risk of arrhythmia. As part of the membranes of nerve cells, as well as participating in the metabolism of the nervous system, omega-3 contribute to more effective nerve impulse, and thus the normal operation of the brain and nervous system. They also regulate the exchange of serotonin - the "hormone of good mood", reducing the risk of depression. The combination of food supplements Olekap polyunsaturated acids (PUFA) with vitamins A and E helps to normalize blood coagulation parameters and blood pressure, reduces the risk of blood clots.

Vitamin A (retinol) supports reproductive functions. The first product of the oxidation of retinal - retinal - is involved in the photoreception (view). From retinoic acid dependent growth and integrity of epithelial tissue, including mucosal all three channels: respiratory, power and emissions.

Thus arises in vitamin A deficiency metaplasia, epithelial mucosa of the throat and the nasal airway of predisposes rhinitis, otitis media, bronchitis, pneumonia, plays an important role of vitamin A and in maintaining the structural integrity and function of the digestive tract. With a lack of it there is an upset stomach and intestine appear gastritis, ulcerative colitis and other diseases. Unfortunately, the literature says nothing about the needs of patients in other vitamins and their deficit also has an impact on the course of pathological processes. Diseases of the digestive tract often become chronic, rather than cured, and often give rise to malignancy. According to the materials of the Scientific-Research Institute. NN Petrova, malignant tumors of the stomach in 15% of cases were preceded by long-existing ulcers. However, this applies not only to diseases of the digestive tract. This also gives the Institute the following data: breast cancer 30% preceded fibroadenomatosis; uterine cancer in 42% of cases - unhealed cervical erosion. It was also found that the various chronic diseases preceded rectal cancer in 73% of oral cancer - in 83.7%, cancer of the lower lip - in 91.7%, and skin cancer - in 97% of cases. In almost all these studies it was established deficiency of vitamin A. For example, when there was a persistent mastitis, more than 40% reduction in the content of vitamin A in the blood. Treatment by the addition of vitamin A in food for 2-3 months resulted in 70% of cases to complete and 20% - partial disappearance of signs of mastitis.

Vitamin E (tocopherol) is a fat-soluble vitamin. It is an antioxidant, i.e. protects cells from pathological peroxidation, which leads to aging and death. Peroxidation plays an important role in the development of malignancies in the body, so it is believed that the antioxidants protect against cancer. With a lack of vitamin E cells become susceptible to the action of toxic substances, will be damaged, weakened immunity.

The significance of vitamins to the reproductive system, so it is often referred to as "vitamin of reproduction." When vitamin deficiency in men decreased sperm production, women are menstrual disorders, decreased libido.

Vitamin E has a weak estrogen-like activity, so it can partially offset the adverse effects of estrogen deficiency such as decreased libido, dryness of mucous membranes of the genitals, depression, menopausal syndrome (flushing, sweating, mood changes).

PANAXODMAMITON
Back to: Healing and Prophylactic Preparations