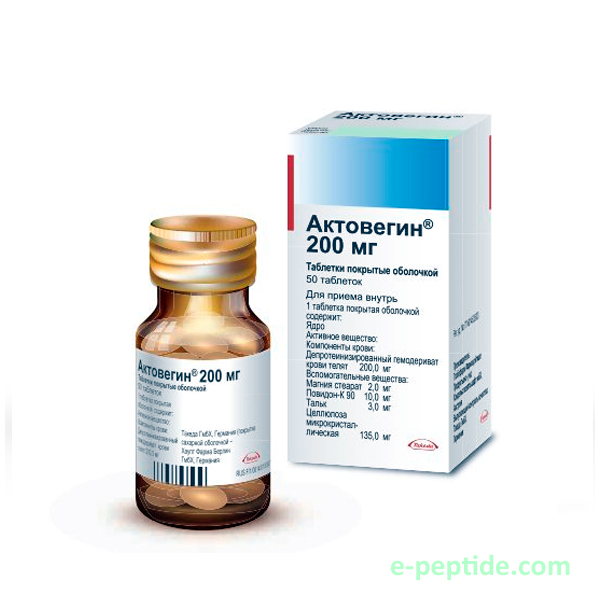 ACTOVEGIN® activates tissue metabolism, improves trophism and stimulates the regeneration process.
It is an antihypoxant that has three types of effects: metabolic, neuroprotective and microcirculatory. Actovegin® increases the absorption and utilization of oxygen. Inositol phospho-oligosaccharides, a part of the preparation, have a positive effect on the transport and utilization of glucose, that leads to an improvement in the energy metabolism of cells and a decrease in the formation of lactate under conditions of ischemia. Several ways of implementing the neuroprotective mechanism of drug action are considered. Actovegin® prevents the development of apoptosis induced by beta-amyloid (Aβ25-35). Actovegin® modulates the activity of nuclear factor kappa B (NF-kB), which plays an important role in the regulation of apoptosis and inflammation in the central and peripheral nervous system. Another mechanism of action is associated with the nuclear enzyme poly (ADP-ribose) -polymerase (PARP). PARP plays an important role in detecting and repairing damage to single-stranded DNA; however, excessive activation of the enzyme can trigger cell death processes in conditions such as cerebrovascular disease and diabetic polyneuropathy. Actovegin® inhibits PARP activity, that leads to functional and morphological improvement in the state of the central and peripheral nervous system.
The positive effects of Actovegin®, influencing the processes of microcirculation and endothelium, are an increase in the speed of capillary blood flow, a decrease in the pericapillary zone, a decrease in the myogenic tone of precapillary arterioles and capillary sphincters, a decrease in the degree of arteriovenular shunting blood flow with predominant blood circulation in the capillary syntalis function of the endothelial nitrogen, affecting the microvasculature. In the course of various studies, it was found that the effect of Actovegin® occurs no later than 30 minutes after its administration. The maximum effect is observed 3 hours after parenteral administration and 2-6 hours after oral administration.

As part of complex therapy:

The drug is taken orally before meals.

THYMALIN-10VETOM® dentifrice (tooth powder)
Back to: Peptide and Non-peptide preparations