THYMALIN® is a polypeptide complex isolated from the thymus of young animals with a molecular weight below 10 kDa. Pharmaceutical containing natural peptides (Thymalin ®) is officially approved for use as an immunomodulator for viral and bacterial infections, diseases of bones and soft tissues, disorders of regenerative processes, bronchial asthma, conditions accompanied by hypofunction of the thymus etc.Thymalin is an effective immunomodulator that normalizes the functions of the immune system: strengthens weakened immunity and reduces an inadequately high immune response.

The peptide preparations of the thymus ("Thymalin", peptides EW, EDP and KE) were shown to be effective in the treatment of many diseases and conditions associated with decreased cell immunity and phagocytosis after radiotherapy and chemotherapy in cancer patients. It also had an effect in many other clinical setting such as cases of acute and chronic infectious and inflammatory diseases, overuse of antibiotics, oppression of the regeneration processes in post-traumatic and postoperative complications, obliterating diseases of arteries, chronic liver or prostate diseases and complex treatment of certain forms of tuberculosis. Application of "Thymalin" in different clinical studies improved immune functions significantly (increased amount of T-lymphocytes, T-lymphocytes-helpers, enhanced reaction of lymphocytes blast-transformation in presence of phytoheamagglutinin and Concanavalin A were registered, as well as reinforced reaction of phagocytosis).

The study of the geroprotective effect of Thymalin on the elderly for 6-8 years showed that it normalizes the basic functions of the human body: the indicators of the cardiovascular, endocrine, immune and nervous systems and metabolism improve. In the group of patients treated with Thymalin the incidence of acute respiratory diseases decreased 2 - 2.4 times, the number of manifestations of ischemic heart disease, hypertension, deforming osteoarthritis and osteoporosis decreased compared to controls. The mortality rate in the group of people who received thymalin decreased by 2 - 2.1 times. Thus, Thymalin has a high geroprotective effect in people over 60 years old, both by itself and in complex use. Thymalin is used in the complex therapy of a number of diseases, including oncological ones. 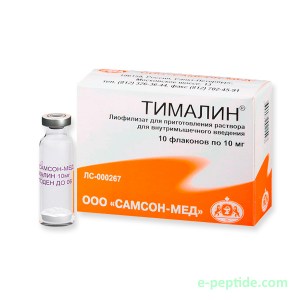