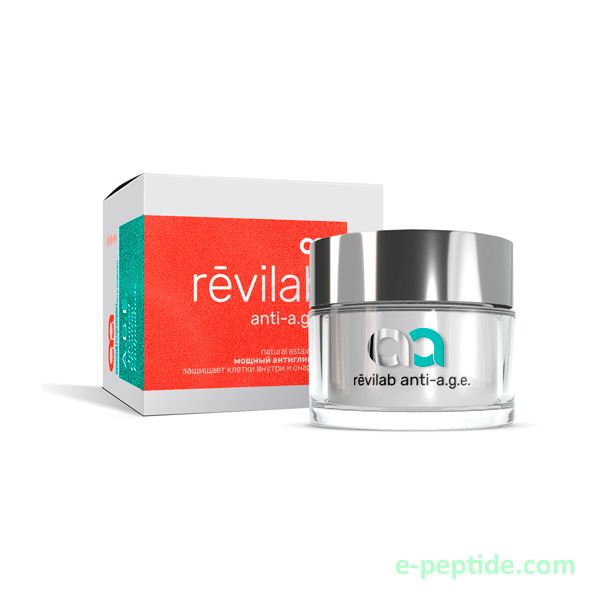 A highly effective anti-aging drug with a powerful, deglycating and antioxidant effect, which guarantees the fastest and most intense action in the fight against protein degradation and age-related changes in the skin.

Effective and persistent action of this anti-aging agent is based on stimulating the process of deglycation, which affects the deep processes of skin aging and helps to smooth wrinkles and increase their elasticity.

Includes a powerful complex for the control of glycation — an extract of rosemary, carnosine, taurine, astaxanthin and alpha-lipoic acid. Due to the composition, which is so saturated with active ingredients, the drug helps to achieve a prolonged effect of rejuvenation not only of the skin, but also of all the body's protein structures.

Has a powerful anti-glycating, anti-inflammatory, regenerating effect. There is evidence that rosmarin acid, a natural molecule present in large quantities in rosemary, has the strongest analgesic effect from all known, including synthesized molecules. The phytoncides contained in rosemary are excellent antioxidants, prevent the aging of the body, protect youth and beauty.

Dipeptide, a natural antioxidant and a "trap" of free radicals. To date, important biological functions of carnosine have been established, in particular, the ability to exhibit antioxidant and antiglating properties. He is able to recognize a large range of very dangerous to human health molecules coming from outside or formed in the body itself. Chemically binds to them and detoxifies them. Carnosine is a universal detoxifier and protector of the brain, eyes, heart and skeletal muscles.

Has a special effect on the skin: reduces the number of wrinkles, increases the level of moisture and restores its elasticity. Studies have shown that, thanks to a special chemical structure, astaxanthin is an amazing antioxidant, 100 times more effective than vitamin E and 10 times more effective than beta-carotene. It protects our body from free radicals and glycation products of proteins. Astaxanthin interacts with other antioxidants, such as vitamins C and E, increasing their effectiveness.

It has an antioxidant effect, protecting the body against cardiovascular diseases and cancer. Some studies have shown that it lowers blood pressure and neutralizes the negative impact of high salt intake. Stresses cause a rise in blood pressure due to the release of epinephrine and norepinephrine, narrowing the blood vessels. Taurine confronts this process, reducing pressure. The main task of this component is to normalize metabolic processes at the cellular level and protect proteins from damage.

A strong antioxidant that is able to bind aggressive free radicals, improves the metabolism of sugar in the cell, preventing it from accumulating and sticking with collagen or elastin fibers. This component is able not only to prevent the process of glycation, but also to restore already damaged cells. It protects the body from ultraviolet radiation, takes an active part in energy production in the body, promotes vision improvement, has neuroprotective and hepatoprotective action, normalizes cholesterol level in atherosclerotic vascular lesions.

Adults take 1 capsule per day during meals. Course duration 4–6 weeks. If necessary, you can repeat. There may be repeated practices during the year.

VITA L - peptide cream with lifting effect
Back to: Peptides for rejuvenation and aging prevention