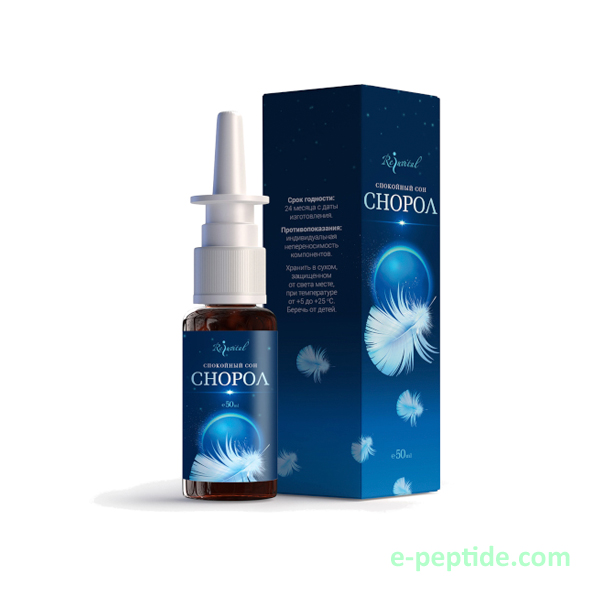 REJUVITAL SNOROL is a preparation aimed at eliminating the physiological causes of snoring - drying out of the mucous membrane of the nose and larynx, too much relaxation of the internal and external muscles of the larynx, as well as preventing the consequences.

Every fifth person on earth snores while sleeping. Snoring, contrary to popular belief, is a serious problem that causes discomfort not only to others. Loud noises at night may indicate the presence of ENT pathology, overweight, or more serious functional disorders. Snoring is often accompanied by bouts of respiratory arrest (apnea), which leads to oxygen deficiency of vital organs and systems and to an increased risk of heart attack and stroke.

In a sleeping person, the tone of the muscles of the upper respiratory tract decreases, and this often leads to the fact that soft tissues are drawn in along with air. The likelihood of snoring increases with certain diseases and conditions, such as a deviated septum, polyps in the nasal cavity, congenital narrowness of the nasal passages and pharynx, enlarged tonsils, adenoids, elongated uvula, and being overweight. Also, the causes of snoring can be constant lack of sleep and fatigue; smoking and alcohol abuse; taking sleeping pills and other potent drugs; decreased thyroid function; general aging of the body.

To eliminate the physiological causes of snoring, as well as to prevent their consequences, Rejuvital has developed an anti-snoring remedy Snorol.

The composition of Snorol includes components that soften and moisten the larynx. The tannins contained in the oak bark extract cause a slight tension in the muscles of the larynx, thicken the tissues of the nasopharynx. "Snorol" has a decongestant, anti-inflammatory and tonic effect.

Snorol improves the quality of night sleep, relieves anxiety and emotional tension. In addition, with regular use, "Snorol" improves the condition of the gums and the oral cavity as a whole, and also eliminates bad breath.

Hypersensitivity to one of the components of the preparation.

30 minutes before use, you must refuse to eat and drink. Three sprays should be made at a time. The drug should fall on the back wall of the pharynx, for which during its use it is necessary to tilt the head back as much as possible. After applying the spray, you must refrain from eating, drinking and brushing your teeth.
Special instructions:

Before use, it is recommended to shake the bottle, which will ensure a uniform distribution of active ingredients. After use, the spray tip must be thoroughly wiped with a dry cloth and closed with a cap. Means is effective within 7-8 hours. One bottle of 50 ml is enough for three weeks of daily use.