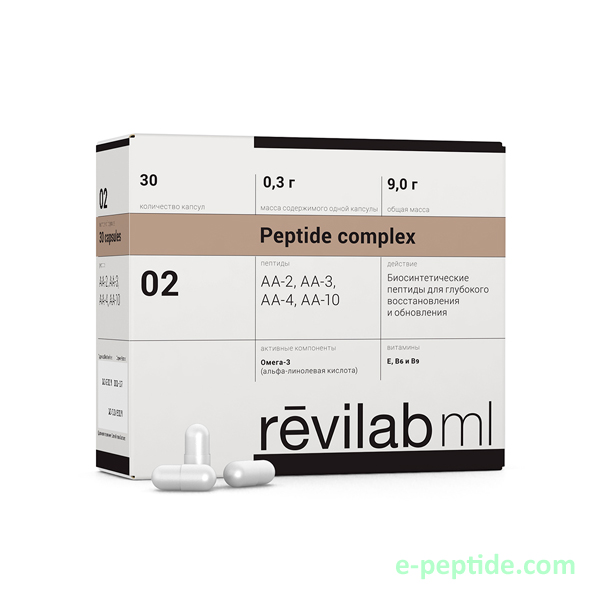 It restores the hematopoietic system and also has an anti-anemic effect. The peptide of bone marrow stimulates the processes of tissue regeneration, tissue-specific proteins synthesis, proliferative and metabolic activity of cells. It accelerates healing of wounds and activates the functions of connective tissue cells, endotheliocytes, macrophages and leucocytes. It has  antioxidant and immunostimulatory properties.

Vitamin E is necessary for all tissues of the body. It is a powerful antioxidant that effectively fights free radicals, affects the excretion of toxins and chemicals, thereby reducing the risk of carcinogens. It protects red blood cells - blood cells, which tend to enrich the tissues and organs not only oxygen but also nutrients; improves oxygen transport to the tissues, blood circulation, supply processes and oxidation of cells. Due to effects on blood clotting it prevents the formation of blood clots in the vessels. It used for prevention of atherosclerosis.

Vitamin B6 is important for maintaining the normal functioning of the body. It improves the absorption of unsaturated fatty acids, without which the health and beauty does not happen. It is directly involved in the metabolism of proteins and amino acids, affects the production of hemoglobin. It influences on how much energy the body will get from proteins, fats and carbohydrates.

Vitamin B9 supports an efficiency, improves mental state, stimulating the production of substances, many of which provide timely and appropriate transmission of nerve impulses to be involved in hematopoiesis, regulates the production of adrenaline, which increases the body's resistance to external influences.

Omega-3 is a polyunsaturated fatty acids (alpha-linolenic, eicosatrienoic, eicosapentae- noic acid and other). It reduces the content of cholesterol in the body, triglycerides and low-density lipoprotein, inhibits the progression of atherosclerosis, cardiovascular and rheumatic diseases, thrombosis and normalizes metabolic processes.