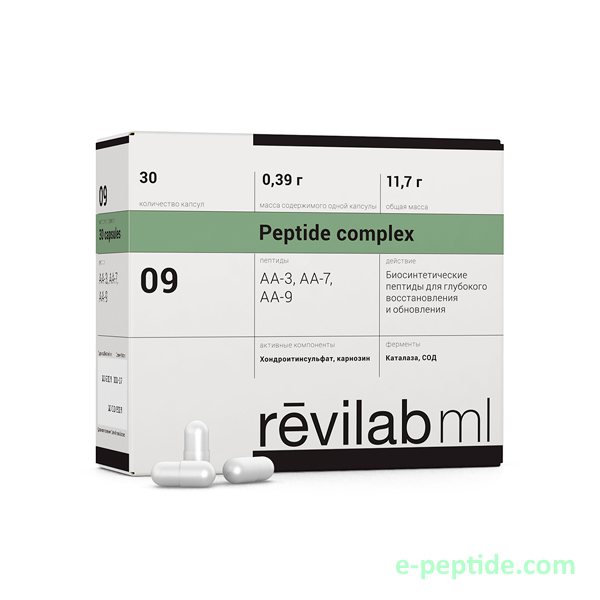 Effective action of Revilab Peptide ML is due to the high-tech formula: each of 9 preparations contains a number of synthesized peptides that have a faster effect on various body systems, triggering the function of restoring internal organs, unique plant components that have powerful antioxidant and anti-age effects, vitamin complexes. They play an important role in maintaining the optimal functioning of immunity.

It influences on the cellular and humoral immunity and nonspecific resistance of the organism. It stimulates the regeneration process in the case of depression and improves the processes of cell metabolism.

This is a dipeptide, natural antioxidant and a "trap" of free radicals. To date, important biological functions of carnosine have been established, in particular, the ability to exhibit antioxidant and antiglating properties. It is able to recognize a large range of very dangerous to human health molecules coming from outside or formed in the body itself. It chemically binds to them and detoxifies them. Carnosine is an universal detoxifier and protector of the brain, eyes, heart and skeletal muscles.

Superoxide dismutase (SOD) belongs to the group of antioxidant enzymes. However, catalase enzymes and other antioxidant it protects the body from constantly produced highly toxic oxygen radicals. Superoxide dismutase catalyses the dismutation of superoxide into oxygen and hydrogen peroxide. Thus it plays an important role in antioxidant defense virtually all cells or otherwise in contact with oxygen.

SOD is an enzyme that ensures the safe existence of the human body in an oxygen atmosphere, turning (dismutiruya) superoxide radicals into less toxic compounds. It has antioxidant, anti-inflammatory and tonic effect. It has a protective effect against ionizing radiation, inhibits the formation of free radicals in the body cells, neutralizes the harmful effects of radiation and chemotherapy in cancer patients.

Catalase is a common enzyme found in nearly all living organisms exposed to oxygen (such as bacteria, plants, and animals). It catalyzes the decomposition of hydrogen peroxide to water and oxygen. It is a very important enzyme in protecting the cell from oxidative damage by reactive oxygen species. Likewise, catalase has one of the highest turnover numbers of all enzymes; one catalase molecule can convert millions of hydrogen peroxide molecules to water and oxygen each second.

Chondroitin sulfate is involved in the formation of the basic substance of bone and cartilage. It improves in cartilage calcium and phosphorus metabolism, slowing down the process of degeneration, inhibits enzymes that disrupt the function and structure of the articular cartilage. When using chondroitin sulfate normal hyaline tissue metabolism, increases the production of glycosaminoglycans, activates the regeneration of articular surfaces. It also increases the production of fluid within the joint increases the mobility of affected joints. Inhibits bone resorption, accelerates its repair, reduces the loss of calcium and slows the progression of osteoarthritis. Chondroitin sulfate has analgesic effect that reduces the severity of inflammation, joint pain, pain during walking and resting, can reduce the need for non-steroidal antiinflammatory drugs.

Omega-3 is a polyunsaturated fatty acids (alpha-linolenic, eicosatrienoic, eicosapentae- noic acid and other). It reduces the content of cholesterol in the body, triglycerides and low-density lipoprotein, inhibits the progression of atherosclerosis, cardiovascular and rheumatic diseases, thrombosis and normalize metabolic processes.